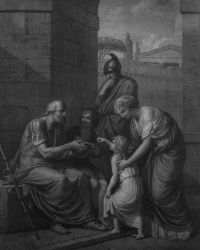 Historical Notes: Count Dugnani, the papal nuncio in Paris during Jefferson's time there, sent this engraving and one of Francisco de Moncada to Jefferson at Monticello by way of two American students whom he met in Rome. Jefferson hung the prints in the Tea Room and, in writing the count, called them, "chef d'oeuvres of that art, which, placed among the ornaments of my house, renew to me daily the memory of your friendship."[1]

As early as 1782, before his journey to Europe, Jefferson wanted a copy of Salvator Rosa's painting Belisarius Demanding Alms to include in his Monticello gallery. The story of the Roman general Belisarius was popularized by the French writer Marmontel, and Jefferson owned a 1768 London edition of his novel, Belisarius.[2] After a successful military career under Emperor Justinian I, Belisarius fell out of favor, and according to tradition, his eyes were put out, reducing him to a life of begging. This engraving after Rehberg's painting shows the moment when Belisarius is recognized by a soldier who once served under him.