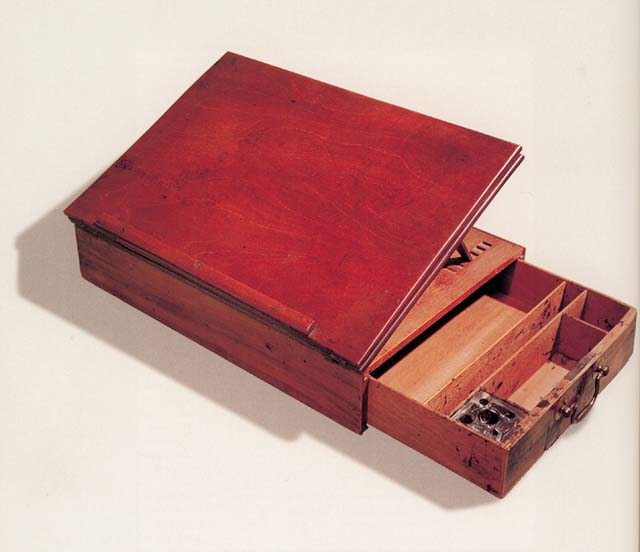 Historical Notes: One of the most precious historical relics of the United States is the lap desk or writing box upon which Thomas Jefferson wrote his draft of the Declaration of Independence in 1776.[1] He presented the desk to his grandson-in-law Joseph Coolidge, Jr., of Boston, who had married Ellen Wayles Randolph Coolidge, one of his favorite granddaughters. He attached an affidavit to the desk:

Monticello. Nov. 18, 1825. Th: Jefferson gives this Writing desk to Joseph Coolidge junr as a Memorial of affection. it was made from a drawing of his own, by Ben Randall, cabinet maker of Philadelphia, with whom he first lodged on his arrival in that city in May 1776. and is the identical one on which he wrote the Declaration of Independance, Politics, as well as Religion, has it's superstitions. these, gaining strength with time, may, one day, give imaginary value to this relic, for it's association with the birth of the Great charter of our Independance.[2]

Although the affidavit was addressed to Joseph Coolidge, the writing box was intended for both Ellen and Joseph, at least in part to console her for the loss in a shipwreck of her belongings en route from Virginia to Boston — among those irretrievable items was a lap desk made especially for her by John Hemmings, Monticello's proficient enslaved joiner. Commiserating with his granddaughter, Jefferson tendered her a priceless replacement.

Once Coolidge had received the desk, he expressed his gratitude to Jefferson.

When I think of this desk, "in connection with the great charter of our independance," I feel a sentiment almost of awe, and approach it with respect; but when I remember that it has served you fifty years—, been the faithful depository of your cherished thoughts; that upon it have been written your letters to illustrious and excellent men—your plans for the advancement of civil and religious liberty, and of Art and Science; that it has, in fact, been the companion, of your studies, and the instrument of diffusing their results;—that it has been the witness of a philosophy which calumny could not subdue, and of an enthusiasm which eighty winters have not chilled,—I would fain consider it as no longer inanimate, and mute, but as something to be interrogated and caressed.[3]

This uncommon desk, made entirely of mahogany, was made to Jefferson's specifications by the prominent Philadelphia cabinetmaker, Benjamin Randolph, with whom Jefferson lodged when he first came to Philadelphia in July 1775 and when he returned in May 1776.[4] Although a payment was recorded for Randolph's workmen for three boxes in September, the purchase of a writing box or lap desk was not noted in Jefferson's memorandum books. Jefferson's drawings for the desk do not survive. The desk consists of a rectangular box with a drawer containing compartments for storing writing implements and paper. A hinged writing board is attached to the upper surface of the box.