HOW THE DECLARATION CAME ABOUT

America's declaration of independence from the British Empire was the nation's founding moment.  But it was not inevitable.  Until the spring of 1776, most colonists believed that the British Empire offered its citizens freedom and provided them protection and opportunity.  The mother country purchased colonists' goods, defended them from Native American Indian and European aggressors, and extended British rights and liberty to colonists. 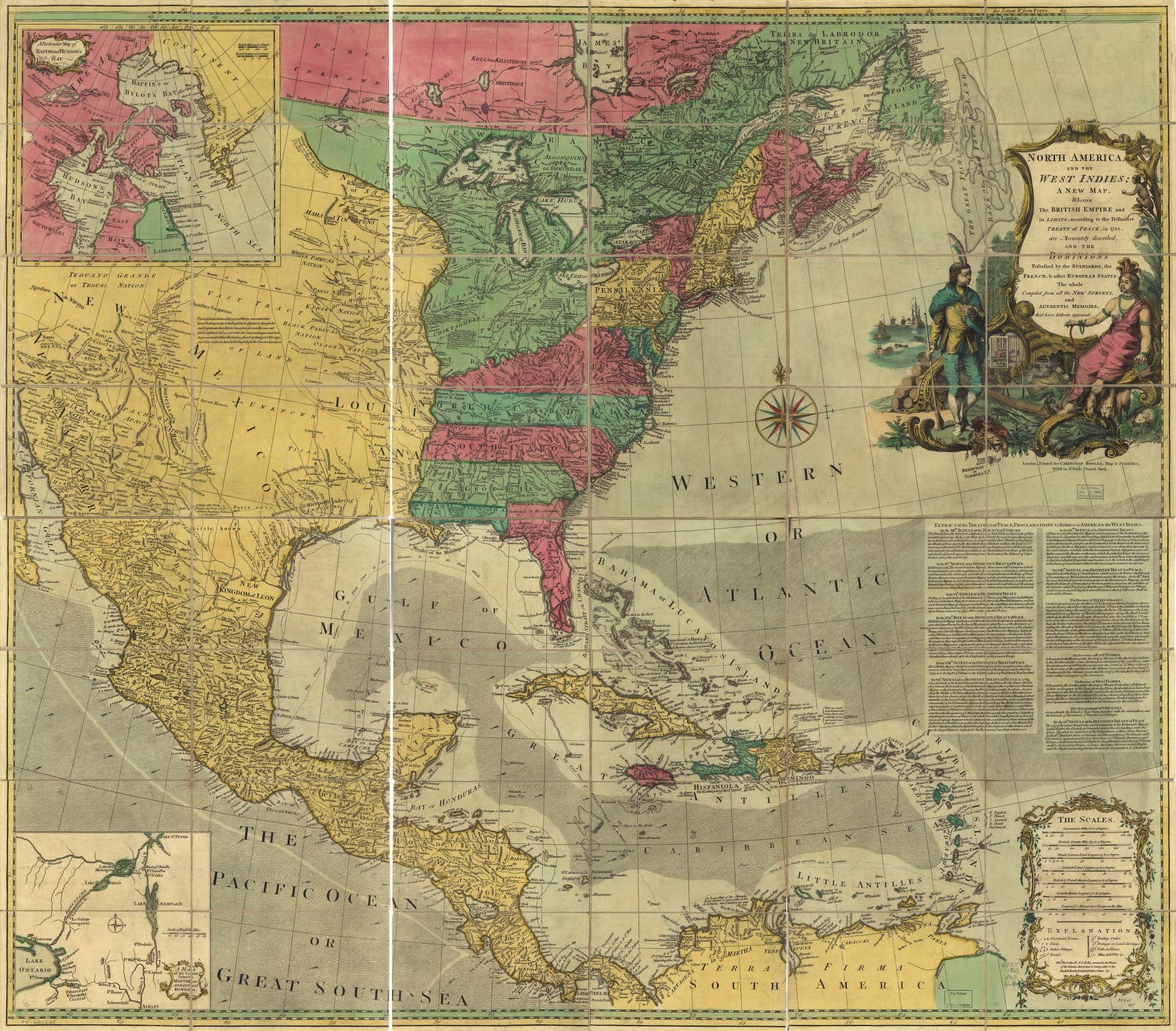 In return, colonists traded primarily with Britain, obeyed British laws and customs, and pledged their loyalty to the British crown.  For most of the eighteenth century, the relationship between Britain and her American colonies was mutually beneficial.  Even as late as June 1775, Thomas Jefferson said that he would "rather be in dependence on Great Britain, properly limited, than on any nation upon earth, or than on no nation." [1]

While the issue had been discussed quietly in the corridors of the Continental Congress for some time, the first formal proposal for independence was not made in the Continental Congress until June 7, 1776.  It came from the Virginian Richard Henry Lee, who offered a resolution insisting that "all political connection is, and ought to be, dissolved" between Great Britain and the American colonies.[2]  But this was not a unanimous sentiment.  Many delegates wanted to defer a decision on independence or avoid it outright.  Despite this disagreement, Congress did nominate a drafting committee—the Committee of Five (John Adams, Benjamin Franklin, Thomas Jefferson, Robert Livingston, and Roger Sherman)—to compose a declaration of independence. Thomas Jefferson, known for his eloquent writing style and reserved manner, became the principal author.

Podcast: The Declaration of Independence and The Committee of Five 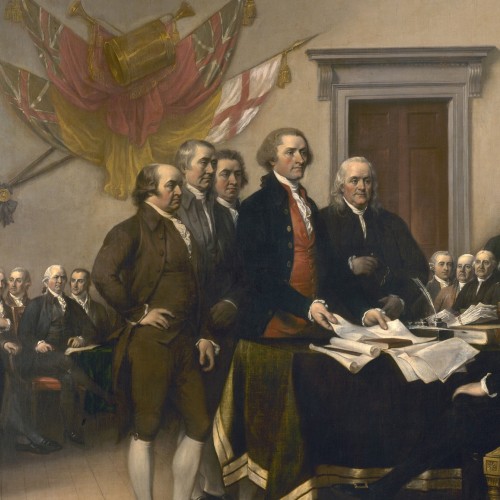 As we approach 250th anniversary of American Independence in 2026, explore more about the Committee of Five — five delegates from five colonies—John Adams of Massachusetts, Roger Sherman of Connecticut, Robert Livingston of New York, Benjamin Franklin of Pennsylvania, and Thomas Jefferson of Virginia— selected to draft the document we know as the Declaration of Independence.

As he sat at his desk in a Philadelphia boarding house, Jefferson drafted a "common sense" treatise in “terms so plain and firm, as to command [the] assent” of mankind.[3]  Some of his language and many of his ideas drew from well-known political works, such as George Mason's Declaration of Rights.  But his ultimate goal was to express the unity of Americans—what he called an "expression of the american mind"—against the tyranny of Britain.[4] 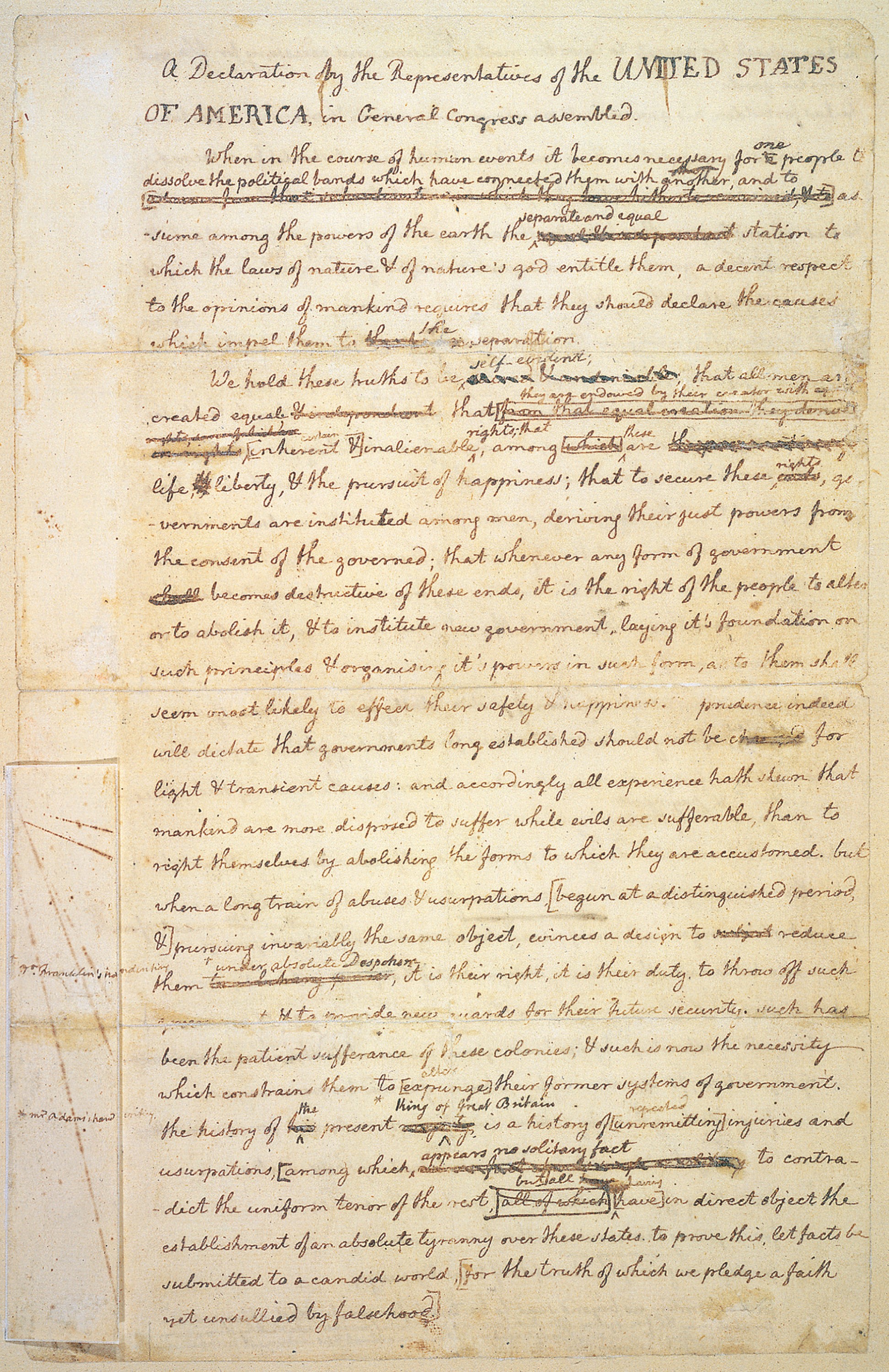 Jefferson submitted his "rough draught" of the Declaration on June 28.  Congress eventually accepted the document, but not without debating the draft for two days and making extensive changes.  (See edited draft at left.)  Jefferson was unhappy with many of the revisions—particularly the removal of the passage on the slave trade and the insertion of language less offensive to Britons—and in later years would often provide his original draft to correspondents.  Benjamin Franklin tried to reassure Jefferson by telling him the now-famous tale of a merchant whose storefront sign bore the words: "John Thompson, Hatter, makes and sells hats for ready money;" after a circle of critical friends offered their critiques, the sign merely read, "John Thompson" above a picture of a hat.[5] 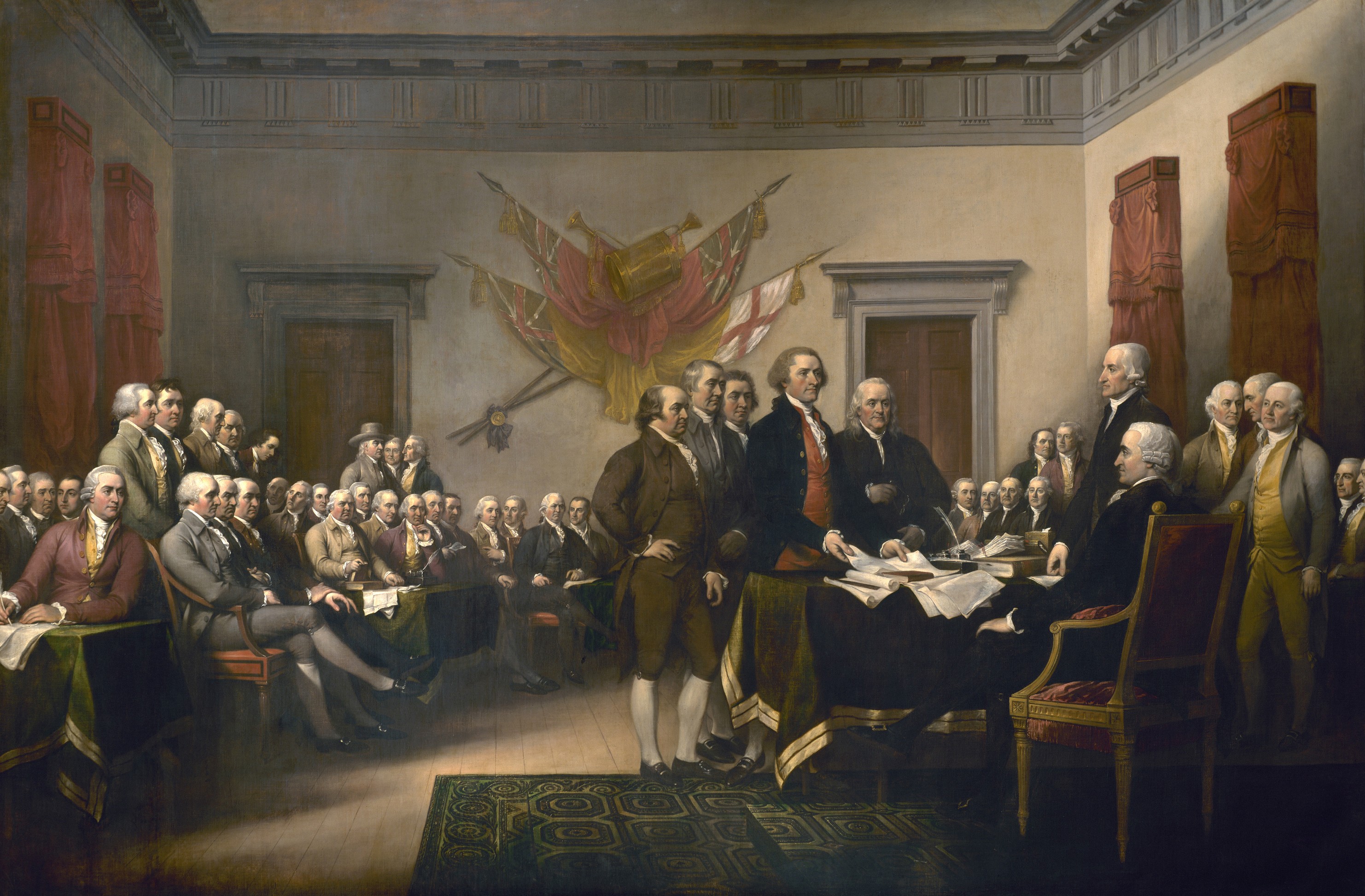 PRINTING AND SIGNING THE DECLARATION

Contrary to popular belief, the Declaration of Independence was not signed on July 4th, the day it was officially adopted by the Continental Congress.

On the evening of July 4, 1776, a manuscript copy of the Declaration of Independence was taken to Philadelphia printer, John Dunlap.  By the next morning, finished copies had been printed and delivered to Congress for distribution.  The number printed is not known, though it must have been substantial; the broadsides were distributed by members of Congress throughout the Colonies.  Post riders were sent out with copies of the Declaration, and General Washington, then in New York, had several brigades of the army drawn up at 6 p.m. on July 9 to hear it read.  The Declaration was read from the balcony of the State House in Boston on July 18 but did not reach Georgia until mid-August.  Twenty-five original copies of what is referred to as the "Dunlap Broadside" are still in existence.

By July 9 all thirteen colonies had signified their approval of the Declaration, and so on July 19 Congress was able to order that the Declaration be "fairly engrossed on parchment. . .and that the same, when engrossed, be signed by every member of Congress."  Timothy Matlack is believed to be the person who printed this version of the Declaration.  On August 2nd the document was ready, and the journal of the Continental Congress records that "The declaration of Independence being engrossed and compared at the table eas signed." Engraving of the Declaration by John Binns, 1819. Thomas Jefferson Foundation.

In time, 56 delegates would sign the “original” engrossed version (including several who had not been present on July 4th).

Following the signing, it is believed that the document accompanied the Continental Congress during the Revolution and remained with government records following the war.  During the War of 1812, it was kept at a private residence in Leesburg, Virginia, and during World War II it was housed at Fort Knox.  Today, the original document is kept in the National Archives in Washington, D.C.

THE LEGACY OF THE DECLARATION

A NEW SYSTEM OF GOVERNANCE

be to the world what I believe it will be, (to some parts sooner, to others later, but finally to all.) the Signal of arousing men to burst the chains, under which Monkish ignorance and superstition had persuaded them to bind themselves, and to assume the blessings & security of self government. the form which we have substituted restores the free right to the unbounded exercise of reason and freedom of opinion. all eyes are opened, or opening to the rights of man. the general spread of the light of science has already laid open to every view the palpable truth that the mass of mankind has not been born, with saddles on their backs, nor a favored few booted and spurred, ready to ride them legitimately, by the grace of god. these are grounds of hope for others. for ourselves let the annual return of this day, for ever refresh our recollections of these rights and an undiminished devotion to them.[6]