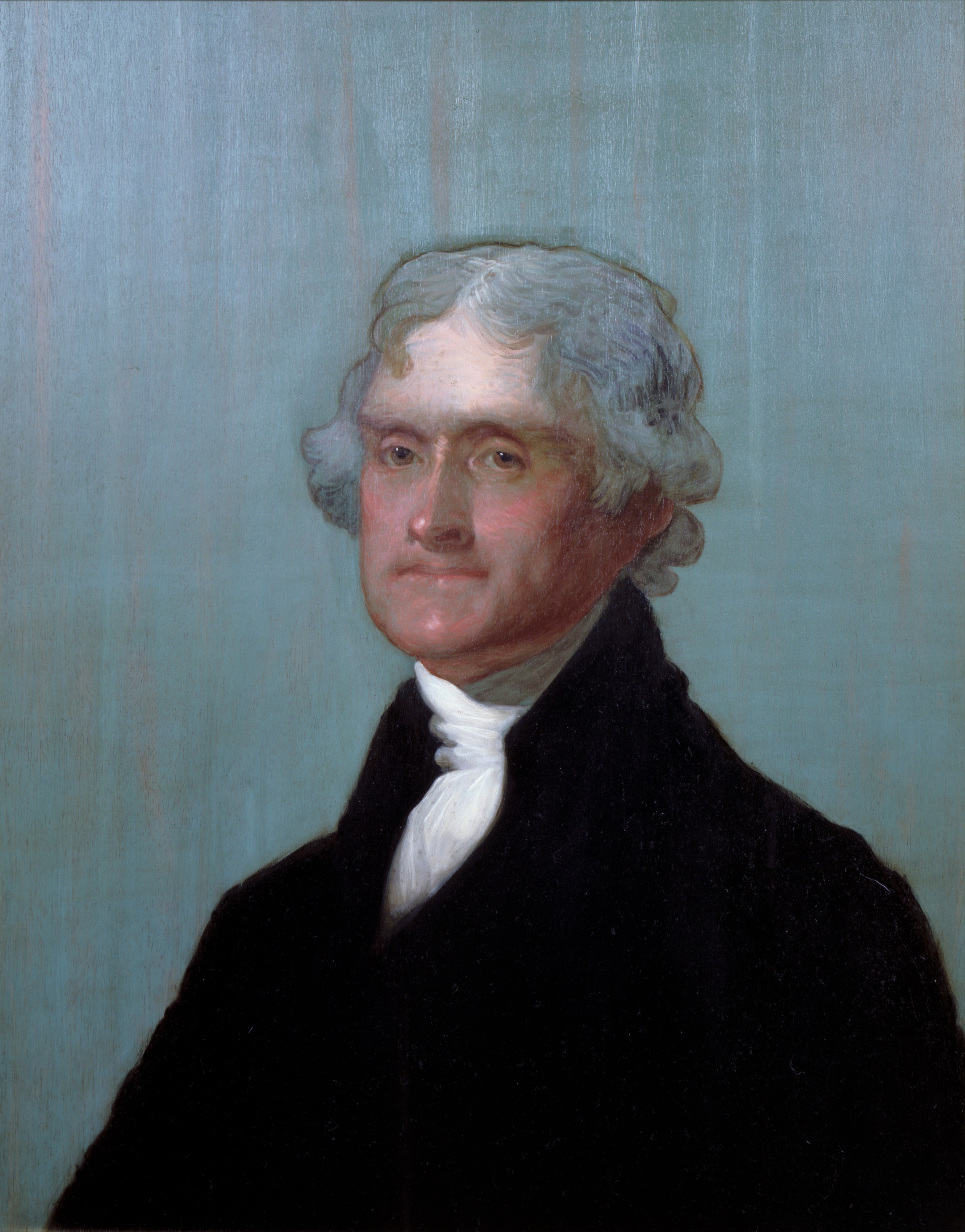 Historical Notes: Before his first portrait, taken in Philadelphia in May 1800 by Gilbert Stuart, had been delivered, Jefferson sat again for the noted portraitist in his Washington studio shortly before June 7, 1805. Jefferson wrote that he sat for the second likeness upon Stuart's insistence.

With respect to mr Stuart, it was in May 1800, I got him to draw my picture, and immediately ... paid him his price [one hundred dollars]. he was yet to put the last hand to it, so it was left with him. when he came to Washington in 1805, he told me he was not satisfied with it and therefore begged me to sit again, and he drew another which he was to deliver me instead of the first, but begged permission to keep it until he could get an engraving from it.[1]

From the beginning Jefferson knew that it would be difficult to wrest a finished portrait from Stuart's studio. Of the three portraits of Jefferson by Stuart, only the Medallion, a smaller grisaille profile, would be placed expeditiously in Jefferson's hands. Ultimately, it was to take Jefferson sixteen years and considerable effort to obtain the second, or Edgehill, portrait.[2]

In October 1818, more than thirteen years after the second portrait was made, Jefferson called on his old friend Henry Dearborn, the former Secretary of War, to obtain the portrait from Stuart. Dearborn informed Jefferson:

[A]n interview took place, and after many trifling excuses, for the long detention of the portrait, and its unfinished situation he said that he could not finish it in cold weather, but would certainly complete it in the Spring.[3]

The portrait was still undelivered in January 1820. Dearborn again pressed Stuart, who now remarkably said, "that he painted this for himself that he had no commission from any one to paint it."[4] Jefferson sent Stuart a letter that refreshed his memory of the situation, and Stuart agreed to provide either a common portrait or a half-length. Jefferson told Dearborn:

I shall be perfectly content to recieve the original he drew in Philadelphia in 1805, which was of the common size (what the painters call, I believe, a bust) it will suit me better than a half length, as it will range better in the line of other portraits, not one of which is half length. I have no doubt that mr Stuart’s justice will think me entitled to the original, & not merely a copy. there was something pleasanter in the aspect of that portrait & which I liked better than the second drawn at Washington.[5]

On August 17, 1821, Jefferson finally reported, "The portrait by Stewart was recieved in due time & good order, and claims, for this difficult acquisition, the thanks of the family ...."[6] Although Jefferson did not specify which portrait he received from Stuart, he was clearly pleased with the result. Whether or not it was the original 1800 life portrait, which Jefferson favored, or the 1805 portrait, or a work of 1821, is a matter of debate.

In any case what came to be known as the "Edgehill" portrait for its long association with the Jefferson Randolphs and their home, Edgehill, this portrait is one of Gilbert Stuart's best works and one of the most compelling portraits of Thomas Jefferson.