Liberty in the Form of the Goddess of Youth (Engraving) 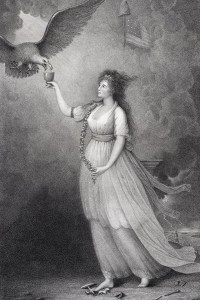 Liberty in the Form of the Goddess of Youth Giving Support to the Bald Eagle.

Historical Notes: Edward Savage's Liberty, a potent symbol of the triumph of the United States over tyranny, hung in the Parlor at Monticello among Jefferson's collection of historical, religious, and allegorical art.[1] Jefferson counted the preservation of liberty among those "sacred & undeniable" rights belonging to all men, and considered liberty to be above politics.[2] "[O]ur Attachment to no Nation upon Earth should supplant our Attachment to Liberty," Jefferson wrote in the 1775 "Declaration of the Causes and Necessity for Taking Up Arms."[3] He believed that the role of the United States was to promote liberty throughout the world.

Jefferson left no record of how he obtained this print, but it was probably available at Savage's Columbian Gallery on Chestnut Street in Philadelphia when Jefferson returned to that city in March 1797. As early as 1760 the Goddess of Liberty became associated with the American cause and was often depicted with figures representing the American continent, such as the Indian Princess. Gradually Liberty herself came to symbolize the young United States and she was often shown as she is in Savage's print, surrounded with icons such as the bald eagle, the American flag, the liberty pole, and the liberty cap, while trampling the symbols of monarchy.[4]

Edward Savage was an American-born artist who worked in Philadelphia, New York, and Boston, and traveled to England to study engraving. He is best known for his portraits of the Washington family. Jefferson's copy of Liberty is unlocated.