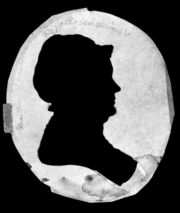 Historical Notes: In 1765 Jefferson's younger sister Martha married his closest childhood friend, Dabney Carr. After Carr's premature death in 1773, Jefferson acted as a father to his six children and directed the education of Peter, the eldest. "Aunt Carr" was an important presence following the death of Jefferson's wife in 1782, and she helped take care of Monticello while her brother served in France between 1784 and 1789. She was described as "a gifted woman, and every way worthy of her husband; and their married life was one of peculiar felicity."[1]