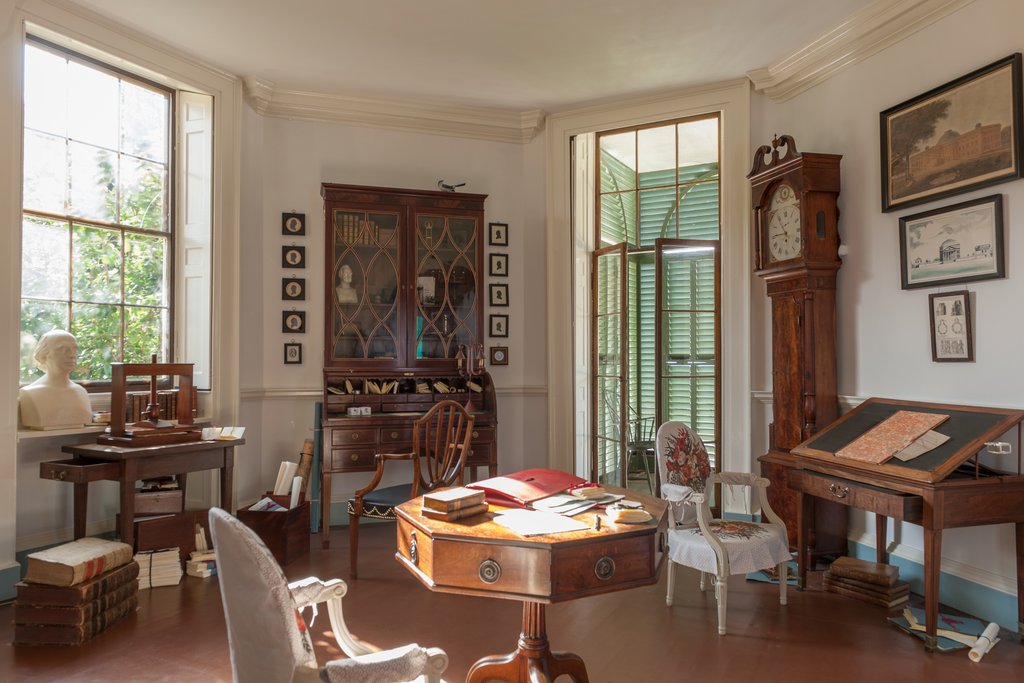 Color: This room had a simple decorative scheme of white walls and cornice, with a gray-blue baseboard.

Purpose of Room: Held Thomas Jefferson's libraries, the largest of which consisted of more than 6,000 books and was sold to Congress in 1815. Later functioned as a library and work space, available for managing correspondence, architectural drafting, and recordkeeping.

Architectural features: part of a "suite" of private rooms used by Jefferson, originally encompassing the book room, later becoming the South square sitting room, library, the Greenhouse, the Cabinet, and Jefferson's Bed Chamber; the plan was based on an octagon, a favored architectural shape for Jefferson.  Also of note is an elliptical arch built by master joiner James Dinsmore and enslaved joiner John Hemmings.

Furnishings of Note: Books (most of the books in Monticello today represent the titles but not the original books that Jefferson owned); Jefferson’s astronomical tall case clock; an octagonal filing table, with drawers labeled for alphabetical filing; Jefferson's adjustable table used for reading, writing, and drawing.

1796. (Isaac Weld). "A large apartment is laid out for a library and museum, meant to extend the entire breadth of the house, the windows of which are to open into an extensive greenhouse and aviary."1

1800 November 25. (Jefferson to Thomas Mann Randolph). "[A catalog of books] is lying I believe either on the table in my book room, or under the window by the red couch in the Cabinet."2

1802 September 21. (Mrs. William Thornton). "Mr. Thornton arrived this morning—went into the Library which is very extensive, and said to be one of the best private Libraries on the continent ...."3

1804-1805. (Sir Augustus John Foster). "On the ground floor were four sitting rooms, two bed rooms and the library, which contained several thousand volumes classed according to subject and language. ... In Mr. Jefferson's library there was a picture representing a battle, painted by one of the Big-bellied tribe of Indians .... If the library had been thrown open to his guests, the President's country house would have been as agreeable a place to stay at as any I know, but it was there he sat and wrote and he did not like of course to be disturbed by visitors who in this part of the world are rather disposed to be indiscreet."4

1806 January 31. (Jefferson to James Ogilvie). "I had understood that mr Randolph had directed that you should have the free use of the Library at Monticello, or I should have directed it myself. I have great pleasure in finding an opportunity of making it useful to you."5

1806 November 30. (Jefferson to Ellen Wayles Randolph Coolidge). "mr. Burwell asks, in the name of your Mama, for a Nautical almanac. she will find those of many years in the library at Monticello, in the press on the right hand of the Eastern outward door of the cabinet."6

1809. (Margaret Bayard Smith). "When we descended to the hall, he asked us to pass into the Library, or as I called it his sanctum sanctorum, where any other feet than his own seldom intrude. This suit of apartments opens from the Hall to the south. It consists of 3 rooms for the Library .... The library consists of books in all languages, and contains about twenty thousand vols, but so disposed that they do not give the idea of a great library."8

1809. (George Gilmer). "Mr. Jefferson's library-room was locked, but the window-blinds were thrown back, so that I could see several books turned open upon the table, the inkstand, paper, and pens, as they had been used when Mr. Jefferson quitted home."9

1815. (George Ticknor). "On Sunday morning, after breakfast, Mr. Jefferson asked me into his library, and there I spent the forenoon of that day as I had that of yesterday. This collection of books, now so much talked about, consists of about seven thousand volumes, contained in a suite of fine rooms ...."10

Filed In:
Books, Monticello (House)
Available in Our Online Shop