Early in November 1772 — when he had a wife, a month-old child, and an unfinished house — Thomas Jefferson acquired a family pet. For five shillings he bought a mockingbird from one of the slaves of his father-in-law, John Wayles. It was the first in a procession of singing birds that would always be part of Jefferson's household.

Jefferson purchased two more mockingbirds from the same Tidewater source the following year, evidence that the wild mockingbird — a conspicuous presence at Monticello today — was then absent from Jefferson's mountaintop. Twenty years later, it finally arrived in the wake of the westering population. Writing from Monticello in May 1793, Thomas Mann Randolph informed Jefferson in Philadelphia of the advent of the first resident mockingbird, and Jefferson responded with his well-known tribute to Mimus polyglottos: "I sincerely congratulate you on the arrival of the Mocking bird. Learn all the children to venerate it as a superior being in the form of a bird, or as a being which will haunt them if any harm is done to itself or it's eggs. I shall hope that the multiplication of the cedar in the neighborhood, and of trees and shrubs round the house, will attract more of them: for they like to be in the neighborhood of our habitations, if they furnish cover."1 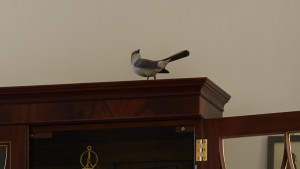 Over the centuries, Monticello has seen millions of people, but history also shows us that Monticello has been the home of sheep, horses, shepherd dogs, deer, mockingbirds, and many others. In this episode of Mountaintop History, Monticello guide Kyle Chattleton shares a few stories of the diverse animals who once, and still, populate this historic site.

The mockingbirds Jefferson purchased in the 1770s came with only a stock of songs from the woods and fields of Charles City County. He must have provided additional musical instruction himself. If he in fact carried a bird to France in 1784, it may have added to its repertoire some sounds common to mockingbirds exported from America. After their month-long transatlantic voyage, the birds interspersed their first European performances with long imitations of the creaking of the ship's timbers.2

At least two of the birds in the President's House had already received singing lessons when Jefferson purchased them in 1803 — for ten and fifteen dollars, the usual price of a "singing" mockingbird. Jefferson's butler, Étienne Lemaire, was apparently proud of their serenades, which included popular American, Scottish, and French tunes, as well as imitations of all the birds of the woods.

Jefferson's weather memorandum book reveals that he had at least four mockingbirds:

and finally, on March 3, "Dick sings."3 A name at last, although it is rather disappointing after the Celtic and Gallic ring of Cucullin and Fingal, Bergère and Armandy, Jefferson's horses and sheepdogs.

Dick is unquestionably the "favorite" mockingbird whose cage Margaret Bayard Smith described as suspended among the roses and geraniums in the window recesses of the presidential cabinet. Jefferson, Smith continued, cherished the favorite "with peculiar fondness, not only for its melodious powers, but for its uncommon intelligence and affectionate disposition, of which qualities he gave surprising instances. It was the constant companion of his solitary and studious hours. Whenever he was alone he opened the cage and let the bird fly about the room. After flitting for a while from one object to another, it would alight on his table and regale him with its sweetest notes, or perch on his shoulder and take its food from his lips. Often when he retired to his chamber it would hop up the stairs after him and while he took his siesta, would sit on his couch and pour forth its melodious strains."4

In the spring of 1809, after Jefferson made his final southward migration, he wrote to Lemaire from his retirement at Monticello: "[M]y birds arrived here in safety & are the delight of every hour."5

1785 June 21. (Jefferson to Abigail Adams). "I heard there the Nightingale in all it's perfection: and I do not hesitate to pronounce that in America it would be deemed a bird of the third rank only, our mockingbird, and fox-coloured thrush being unquestionably superior to it."9

1787 May 21. (Jefferson to Martha Jefferson Randolph). "... Endeavor, my dear, to make yourself acquainted with the music of this bird [nightingale], that when you return to your own country you may be able to estimate it's merit in comparison with that of the mocking bird."10