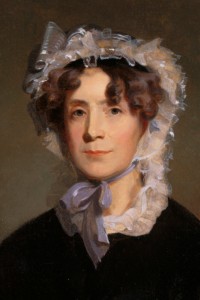 Martha Jefferson Randolph (September 27, 1772 - October 10, 1836), known as "Patsy" in her youth, was the eldest child of Thomas Jefferson and Martha Wayles Skelton Jefferson. Educated in Philadelphia and Paris during the 1780s,[1] she married her third cousin, Thomas Mann Randolph, at Monticello on February 23, 1790.[2] The couple had 11 living children, whom Martha instructed at home.[3]

Closely following and supporting her father's career, Martha earned a reputation for her intellectual abilities. She served during 1802-03 and 1805-06 as "first lady" in the President's House, later known as the White House.[4] After Jefferson's retirement, Martha and her children spent their time primarily at Monticello, even while Thomas Mann Randolph was serving in Richmond as Virginia's governor.

The financial difficulties of both her father and husband were a continual strain on Martha. After her father's death in 1826, the family was forced to sell Monticello and Martha moved to Tufton to live with her eldest son, Thomas Jefferson Randolph. Martha reconciled with her estranged husband shortly before his death in 1828 and lived out the rest of her life with her children alternately in Boston, Washington, D.C., and Albemarle County, Virginia, where she lived at her Edgehill estate. Upon her death, she was buried alongside her husband and father at Monticello.[5]