Earlier this year, Monticello's archaeology team located the remains of a previously undocumented building on Mulberry Row. The new find consists of a brick paving that served as the floor of a log structure whose walls have left no visible trace. Only the northern edge of the paving has been excavated. Archaeologists unearthed it at the bottom of a 20-foot long test trench excavated across Mulberry Row to establish the depth of the Jefferson-era ground surface. The paving, which is part of a structure we call Mulberry Row Structure 3 (MRS3 for short) is a mystery. There is absolutely no hint of its existence in any of Jefferson's records. So we have to rely entirely on archaeological evidence to figure out how old the paving is, its purpose, and how it came to be buried under 3 feet of dirt.

Here's brief update on what we have figured out so far and how we have gone about it. 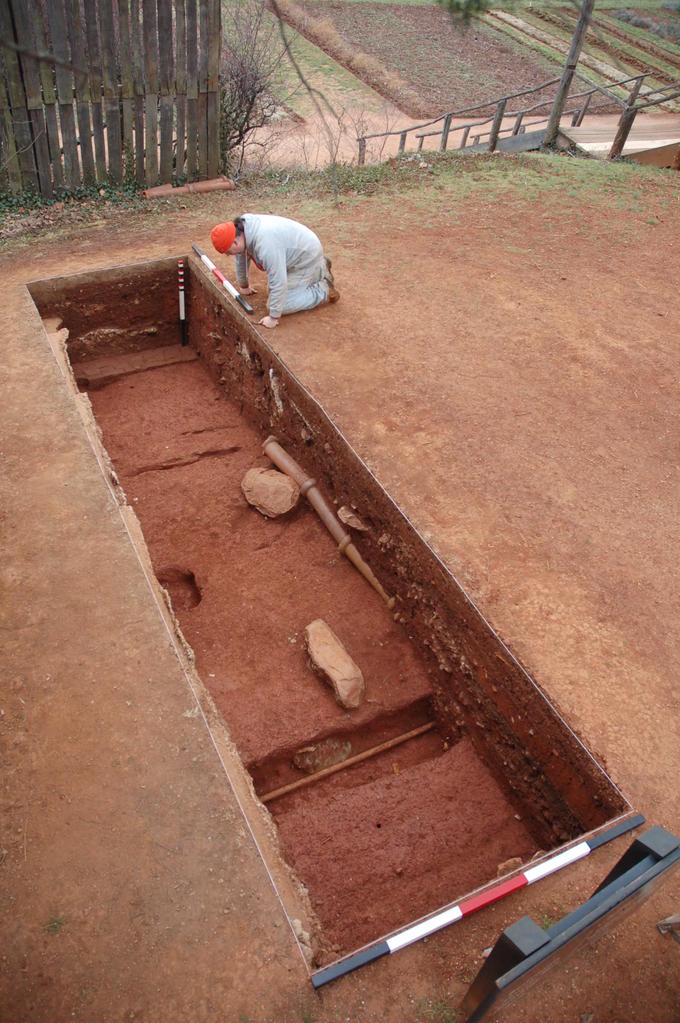 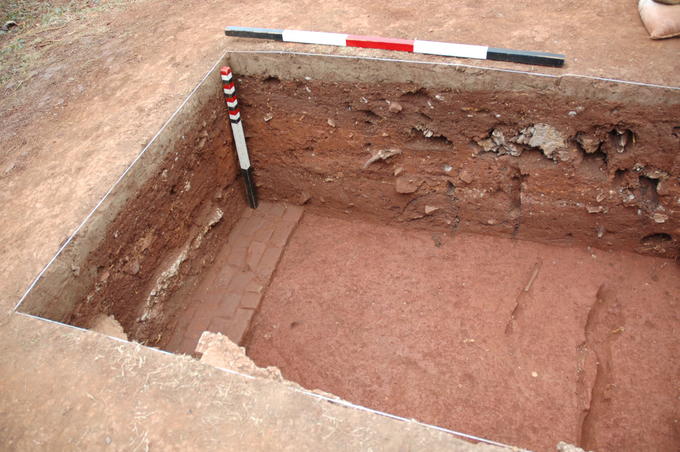 A mysterious brick paving was found under layers of Jefferson-period fill and above that, 20th-century fill. Click for a larger version.

Getting answers to our questions about the paving starts during excavation, with the careful recording the different stratigraphic layers at the site. These can be identified by their distinctive textures and colors. The adjacent figure is a simplified drawing of a vertical section through the layers that covered the mystery paving. Since younger deposits sit on top of older deposits, the vertical sequence provides the age of the layers relative to one another. But how old is each layer, how much time separates the deposition of each one, and how long  are  the intervals of time represented by artifacts in each one? 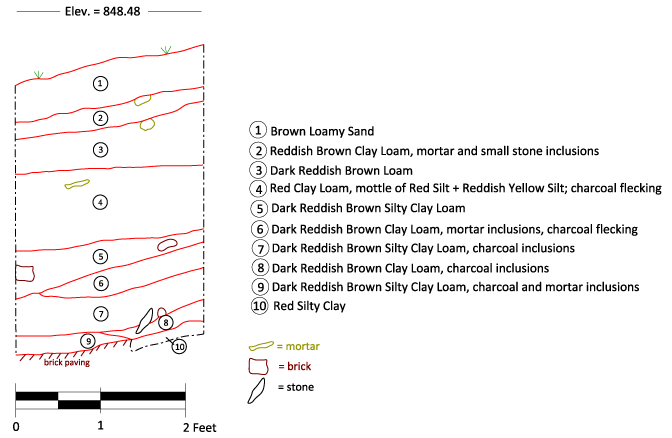 A stratigraphic drawing of the west profile above the brick paving shows the layers deposited in the late-18th and 20th centuries. Click for a larger version.

To answer these questions, we use a technique called "percentage stratigraphy". You can read more about this technique here: http://cladistics.coas.missouri.edu/pdf_articles/AA63(2).pdf. First, we select a set of artifact types whose popularity we know followed a unimodal pattern over time, increasing gradually to a maximum and then declining in frequency. We call these "historical types". We then compute the relative frequency of each historical type in the assemblage of ceramics from each layer. Finally we plot the type frequencies against the stratigraphic order of the layers.

If the artifact assemblages from each layer represent regularly spaced temporal intervals of similar duration, then the type frequencies will show unimodal patterns as we move up the stratigraphic order. Deviations from the unimodal model give us good reason to consider what processes might have caused some of the layers to contain chronologically mixed assemblages from different time periods. 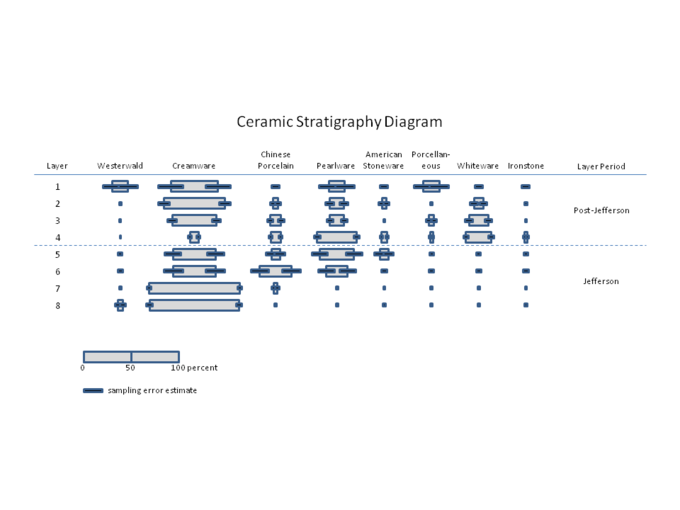 We made two percentage stratigraphy diagrams. In these diagrams, the vertical axis represents the stratigraphic order of the layers, while the horizontal axis portrays the types and their relative frequencies. The first diagram describes frequencies of ceramic types in each layer. One should read the chart from bottom to top, from Layer 8 at the bottom, to Layer 1, the modern ground surface. Creamware, a useful historical type for dating late-eighteenth century deposits, is common in the deepest layers. Pearlware, whose popularity peaked in the early-nineteenth century, first appears in Layer 6 as Creamware percentages start to decline. Whiteware, a reliable post-Jefferson type, shows up only starting in Layer 4 and it continues at high frequency in the three layers above it. From Layer 4 down, the ceramic types conform to the unimodal model we outlined above. However, the top three layers do not. The type frequencies in Layers 1, 2, and 3 suggest the dirt that comprised them came from several distinct sources in a process that mixed together previously deposited Jefferson and post-Jefferson material. 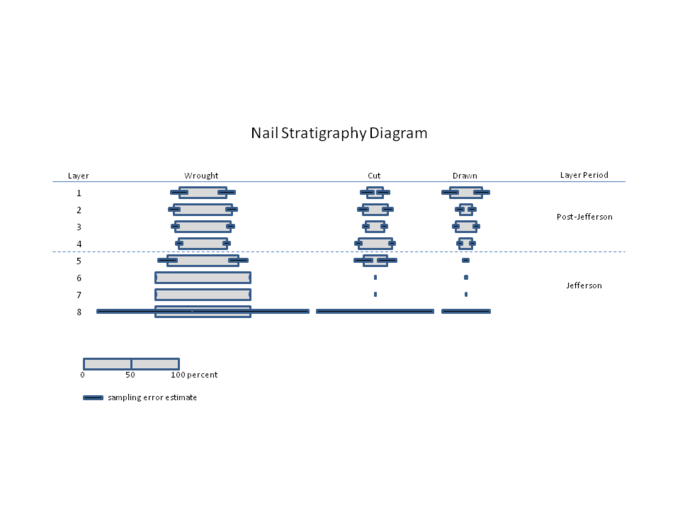 We can test these conclusions by looking at another set of historical types: different kinds of nails. Wrought, or hand-forged, nails are common in archaeological deposits that date to the eighteenth century and the first decade or so of the nineteenth century. Although Jefferson acquired a nail cutting machine in 1796, cut nails do not become common until the second decade of the nineteenth century. Drawn, or wire, nails become common around 1900. Just as we saw with the ceramic diagram, the bottom four layers (Layers 8 - 5) reflect the predicted changes in nail types during Jefferson's lifetime. The sudden appearance of drawn nails in Layer 4 dates its deposition to the early twentieth century. However, the assemblage also contains plenty of eighteenth-century wrought nails, suggesting that it is more of a mixture of artifacts that were previously deposited elsewhere than the ceramic types indicated. The nail assemblages from the upper three layers seem to be even more temporally mixed, agreeing with the ceramic evidence.

The percentage stratigraphy diagrams show that the layers immediately covering the brick paving predate the rise popularity of Pearlware, which began around 1790, and the introduction of cut nails in the same decade. So the brick paving must be even earlier. We conclude that the paving represents one of the earliest structures that Jefferson built on Mulberry Row in the 1770s. It was in use for no more than a couple of decades, after which we see evidence of Jefferson's attempt to level the spot where it stood by adding fill (Layers 9-5 in the stratigraphic section). Layers 1-4 were deposited in the twentieth century. We suspect they are the result of mid-century parking lot construction in front of the modern museum shop, and the installation and removal of a set of brick steps that once linked the vegetable garden and Mulberry Row.

Many questions remain unanswered. We are unsure about the building’s size, although its relationship to the vegetable garden suggests it could not have been much more than ten feet wide, perhaps about the same size of Building l (16-by-10 feet) which was built around 1790 just to the west on Mulberry Row. Domestic artifacts from the layers immediately overlying the paving hint the structure was a dwelling, if we can assume that some of them were discarded during the building’s use in the yard adjacent to it. Future analysis of these artifacts may shed light on the lives of its occupants. Stay tuned!

To sum up then, our analysis dates the mystery paving to the 1770s. It also suggests that the three feet of fill that was subsequently deposited on top of the paving arrived in two different periods, the first in the late eighteenth century, and the second in the twentieth century. This distinction will be critical to future efforts to re

Archaeology Research Slavery and the Legacy of Race