Much to Our Comfort and Satisfaction: Monticello’s Enslaved Cooks

Thomas Jefferson is known today as America’s “Founding Foodie” and visitors to Monticello recorded memories of late afternoon dinner “served in half Virginian, half French style in good taste and abundance,” fine wines from Europe accompanied by unique desserts, early breakfasts “as large as our dinner table…tea, coffee, excellent muffins, hot wheat and corn bread, cold ham and butter.” Jefferson acquired his epicurean taste during his five years as Minister to France, tailoring American and Continental foodways for his table. 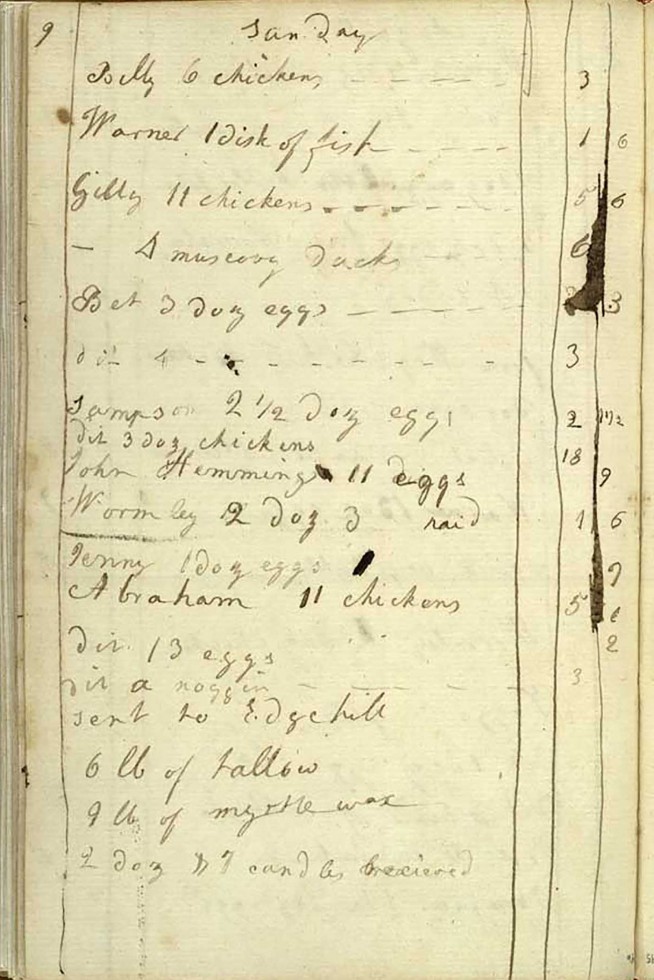 Jefferson’s records, his daughter Martha Jefferson Randolph’s household accounts and family recipes preserved by his granddaughters attest to the remarkable quantity and quality of food and wine served at Monticello. The records rarely mention that the preparation, cooking, serving and cleanup for the meals enjoyed by Jefferson, his family and his guests was made possible by Monticello’s enslaved cooks and their families. Edith Hern Fossett, Monticello’s head cook from 1809 to 1826, followed in the footsteps of three enslaved head chefs before her.

Purchased at the request of Jefferson’s wife, Martha, Ursula Granger worked as a cook, pastry chef, cider maker, washer woman and field hand from 1773 to her death in 1800. Records reveal her skills in the preservation of ham and other meats were highly prized by Jefferson. Married to George Granger, Monticello’s only enslaved overseer, she bore three sons, George Junior, Bagwell and Isaac. She, her husband and eldest son died within months of one another in 1799 and 1800 following a mysterious illness.

When Jefferson became Minister to France, he brought James Hemings with him to be trained as a French chef in Paris. On their return to America in 1789, Hemings served as Secretary of State Jefferson’s chef in New York City and Philadelphia. In 1793, Jefferson agreed to free James Hemings in exchange for teaching his brother, Peter Hemings, his cooking skills. Freed in 1796, Hemings worked as a chef in Baltimore and refused President Jefferson’s offer to work as chef in the White House. Following a brief return to Monticello, seeing family and cooking for Jefferson in the summer of 1801, James Hemings returned to Baltimore. Within weeks of his departure from Monticello, Jefferson received the melancholy news “that the report respecting James Hemings having committed an act of Suicide is true.”

Trained by his brother James, Peter Hemings was Monticello’s head chef from 1796 to 1809. Praised for his desserts, Jefferson described Peter Hemings as a man of “great intelligence and diligence.” When Edith Fossett became head chef, Peter Hemings trained as a brew master, producing 200 gallons of beer annually in addition to working as a house servant and tailor. His nephew, Daniel Farley, bought and freed Peter Hemings in 1827 at the estate sale following Jefferson’s death. As late as 1838 he was living and working as a tailor in Charlottesville.

As President, Jefferson’s taste for fine dining and use of mealtime to conduct political and diplomatic business made the White House the center of Washington society. He hired French emigres Étienne Lemaire as Maître d’hôtel and Honoré Julien as chef, bringing the style and cuisine of Paris to the nation’s capital. From Monticello, he brought three enslaved teenage women to train under Lemaire and Julien: Ursula Granger Hughes, Edith Hern Fossett and Frances Gillette Hern. Comments by White House guests that “never before had such dinners been given in the President’s House” speak to Julien’s skill, but do not acknowledge, behind the scenes, enslaved women from Monticello played an invaluable role in creating the bounty of Jefferson’s table.

In 1801, Ursula Hughes, pregnant wife of Monticello’s head gardener, Wormley Hughes, began her apprenticeship with Julien. In 1802 she was sent back to Monticello following the difficult birth and sudden death of her first child and was replaced at the White House by Edith Fossett, wife of Monticello’s head blacksmith, Joseph Fossett. Joined in 1806 by her sister in law, Frances Hern, wife of Monticello wagoner David Hern, Jr., both women learned every aspect of the art of French cooking and the niceties of French etiquette from Julien and Lemaire. Long separations and brief reunions with their husbands strained both of their marriages as did the challenge of raising children while working seven days a week helping prepare elaborate meals for President Jefferson and his guests. When Jefferson left the Presidency in 1809, Edith Fossett and Frances Hern returned to Monticello, working in the French inspired kitchen for the next seventeen years. Étienne Lemaire assured Jefferson that his “two good girls” would serve Jefferson in the same style as Honoré Julien.

A Day’s Work in The Monticello Kitchen 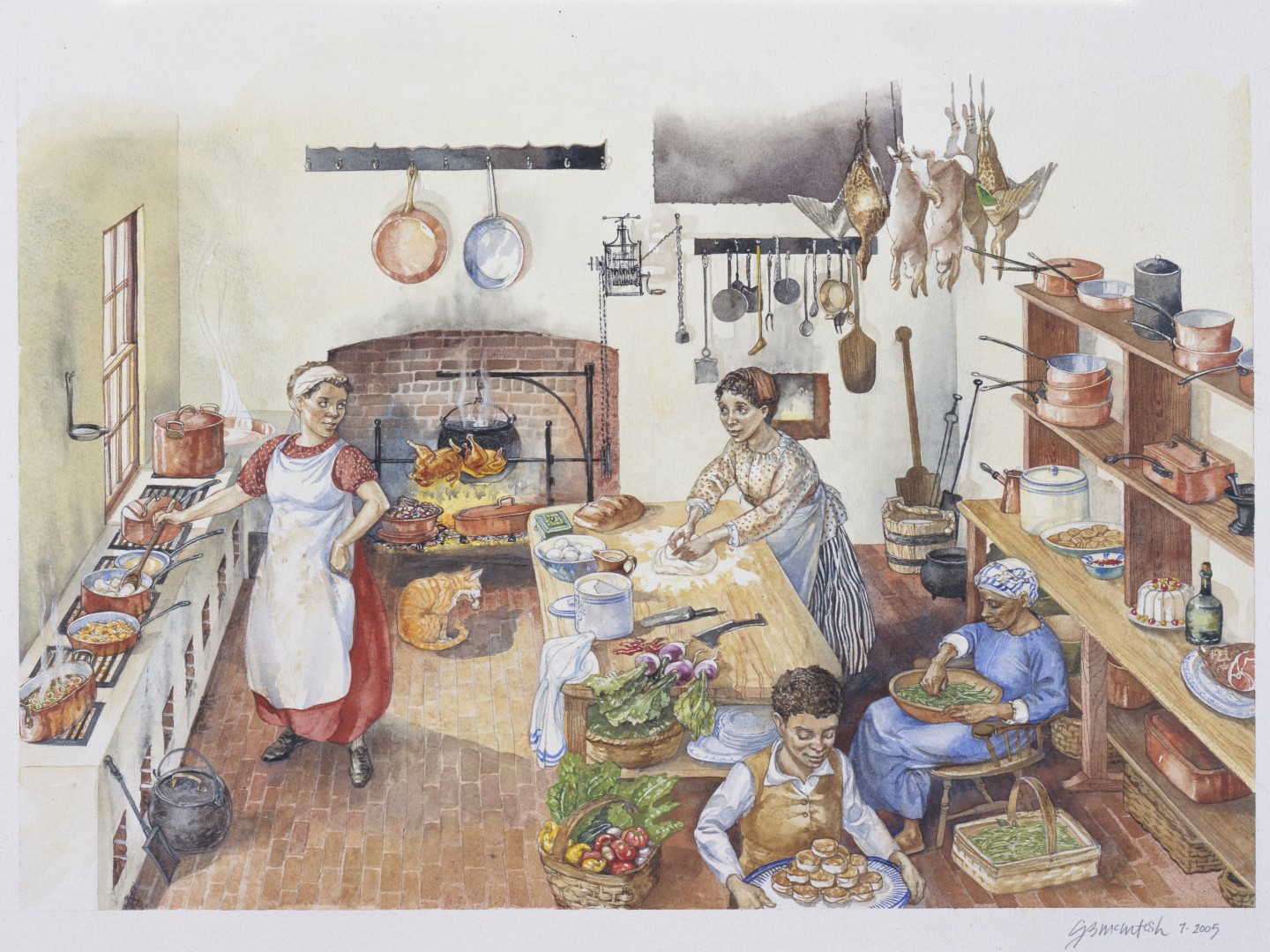 Preparing breakfast, dinner and evening snacks to Jefferson’s standards required long hours and attention to detail. Up to twenty people, including Jefferson, his extended family and steady stream of guests dined each day with a representative dinner consisting of “Rice soup, round of beef, turkey, mutton, ham, loin of veal, cutlets of mutton or veal, fried eggs, fried beef, a pie called macaroni, vegetables in season and ice cream for dessert accompanied by pudding, a great variety of fruit, plenty of wines."

Rising between 5 and 6 in the morning, Edith Fossett and Frances Hern would light the kitchen fires, prepare dough for breads and rolls, slice ham and make advance preparations for the evening meal. Ursula Hughes might join them to make pastries and Peter Hemings might assist in butchering. The Fossett and Hern children would be engaged in kitchen tasks (William and Peter Fossett, became prominent caterers in Cincinnati after they gained their freedom) and family members tended to the dairy adjacent to the kitchen. Jefferson’s enslaved butler, Burwell Colbert, managing all the household operations, would likely check on progress and supervise children from the Hemings, Gillette, Fossett and Hern family in transferring food from the kitchen to the dining room. 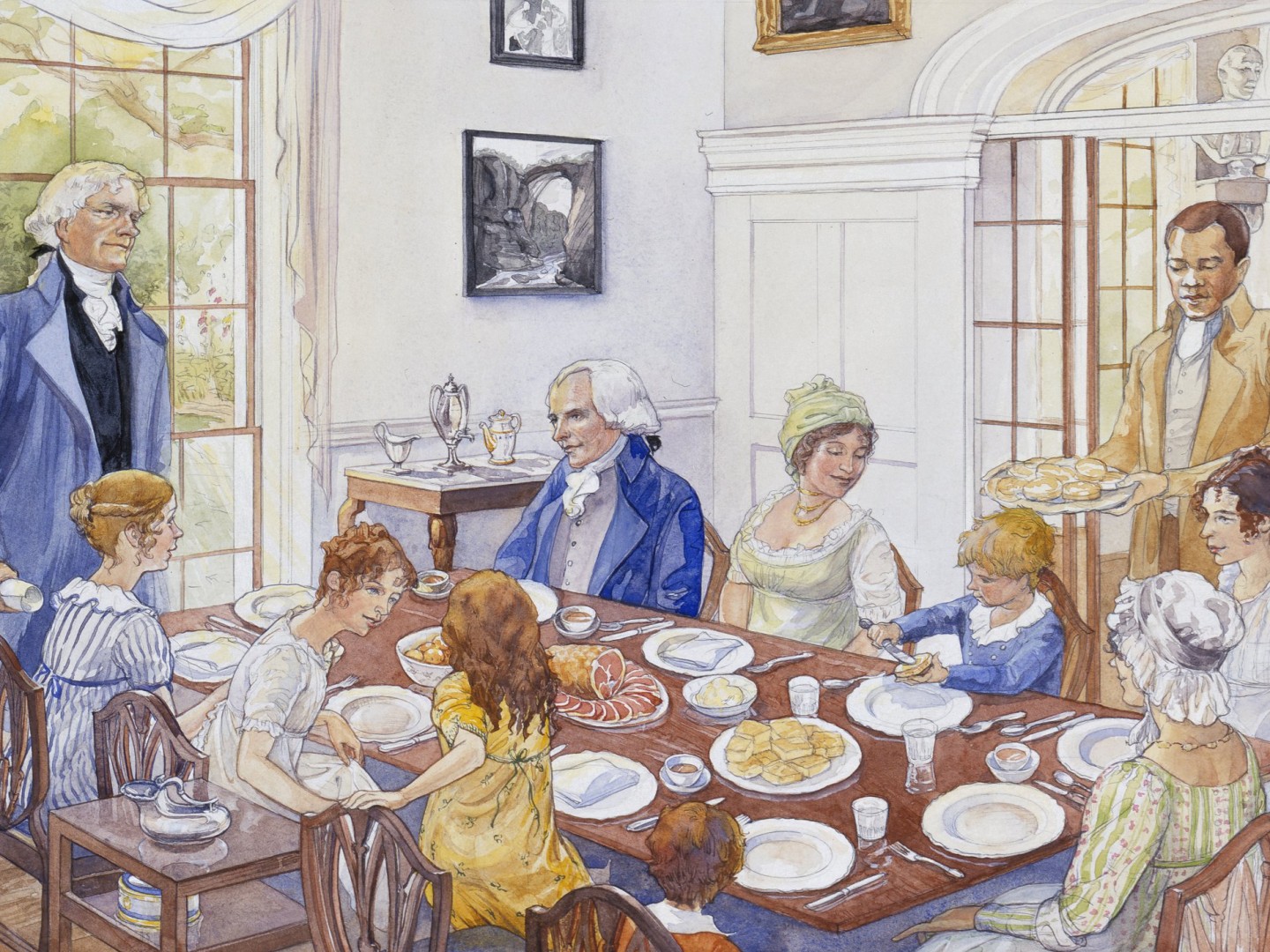 Following breakfast, kitchenware, dinnerware and utensils would be washed and dried and the work of preparing dinner would begin. Dinner was served promptly at 3:30 in the afternoon requiring advance planning to make the best use of the roasting spits and eight stew burners. The three to four hours period prior to dinner were a time to slaughter and hang fowl, beef, and lamb, scale fish and ensure sufficient vegetables were on hand. In the fall, curing and smoking ham required constant attention over a three-week period. Soups, entrees, sauces and vegetable side dishes would be prepared by Edith Fossett and Frances Hern with Peter Hemings making desserts and children such as Israel Gillette and Betsy-Ann Fossett on hand to peel and cut vegetables, stir sauces, slice cheese and help transfer food from the main kitchen to the warming kitchen beneath the dining room. In the dining room, Burwell Colbert and his team of enslaved children, including Eston Hemings, set the tables for provided service à la française, a formal version of family style, with diners serving themselves.

During dinner, the enslaved kitchen staff would wash and clean the pots, pans, Dutch ovens and cooking utensils and prepare for the next days’ meals. Dinner would typically end at six in the evening, requiring dinnerware be cleaned and stored for the next day. At 8 in the evening, a light meal, snacks and beverages would be available for Jefferson’s family and guests, requiring an additional round of preparation and cleanup before Edith Fossett and Frances Hern could spend time with their families prior to bed.