The Life and Morals of Jesus of Nazareth 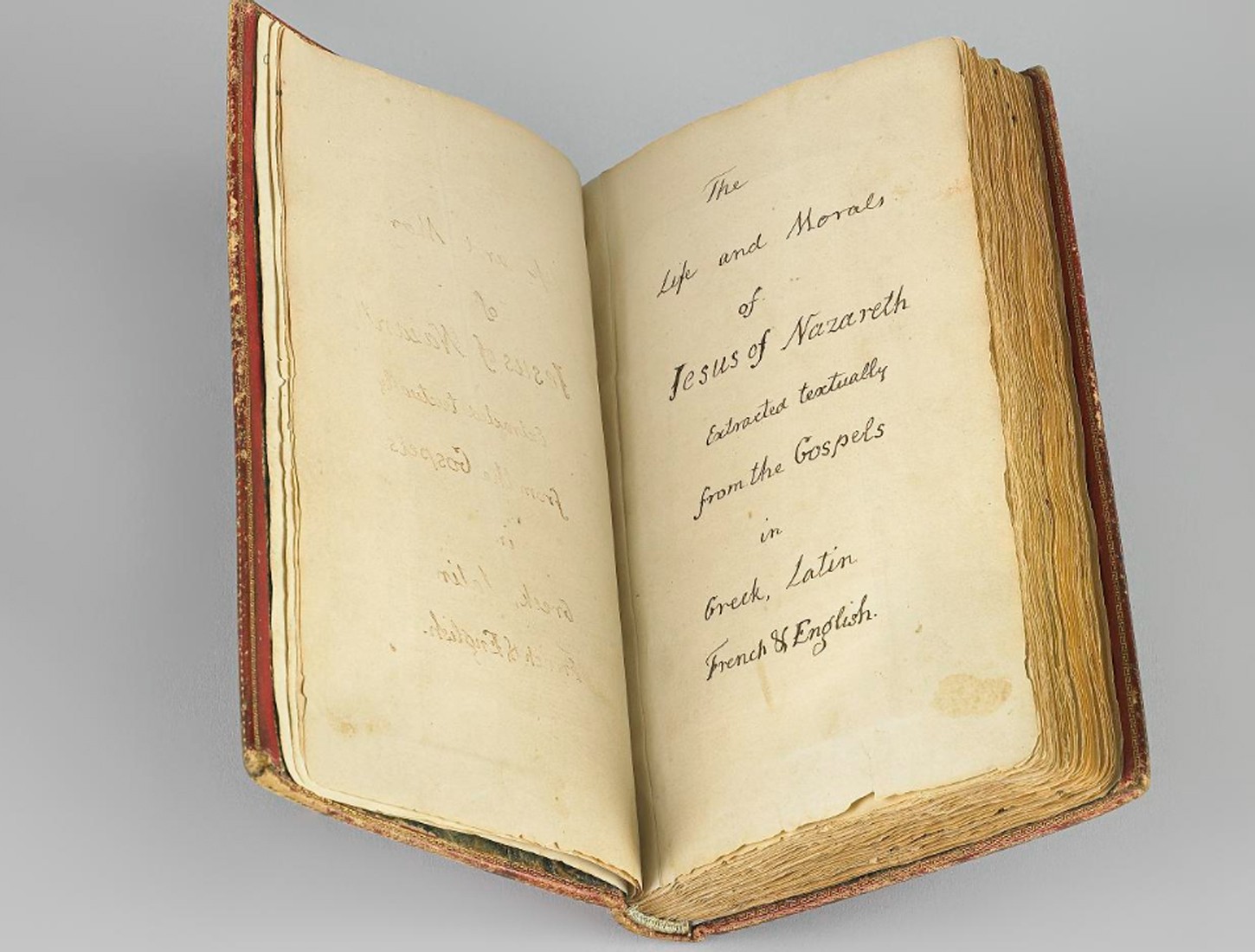 The Life and Morals of Jesus of Nazareth

The Life and Morals of Jesus of Nazareth, known today as The Jefferson Bible, is Thomas Jefferson's own compilation of the four gospels in the New Testament. Jefferson cut out excerpts from six New Testament volumes in English, French, Latin, and Greek, and then assembled them together in this single volume. He arranged his chosen passages to create a chronological account of Jesus' life, parables, and moral teachings. He omitted passages that he deemed insupportable through reason or that he believed were later embellishments, including references to Jesus' miracles and his resurrection. In doing so, Jefferson sought to clarify Jesus' moral teachings, which he believed provided "the most sublime and benevolent code of morals which has ever been offered to man."[1]

Jefferson first excised passages from the New Testament in 1804. He created this first compilation, known as The Philosophy of Jesus of Nazareth, from two English New Testaments he received from Ireland, published in 1791[2] and 1799.[3] By 1805, Jefferson had apparently considered revising the compilation, but did not do so. It was not until late 1819, after William Short, his former private secretary in France, encouraged him to do so, that Jefferson began work on what would become The Life and Morals of Jesus of Nazareth.[4] Short wrote, " . . . I see with real pain that you have no intention of continuing the abstract from the Evangelists which you began at Washington. The reason you give for confining yourself to classical reading & mathematical truths should not, I should think, operate against this agreeable task—& if agreeable to you, I know nothing which could be more so, & at the same time more useful to others. You observe that what is genuine is easily distinguished from the rubbish in which it is buried—if so, it is an irresistible reason for your continuing the work—for others, it would seem, have not found it thus distinguishable."[5]

Jefferson apparently began by preparing a table of contents and then clipped and pasted the Gospel verses onto blank leaves of paper, occasionally adding new verses as he proceeded. Starting from left to right, he inserted the Greek-Latin, French, and English verses in separate columns. With the Greek-Latin text on the left and the French and English verses on the facing page on the right, Jefferson arranged the verses in chronological order, apparently closely following the sequence of events laid out in William Newcome's A Harmony in Greek of the Gospels, first published in Dublin in 1778.[9]

It is unclear when exactly Jefferson completed compiling The Life and Morals of Jesus of Nazareth. Jefferson's letters to Short on April 13, 1820,[10] and August 4, 1820,[11] suggest that the compilation was complete by the time of the second letter, but we do not know for sure. We do know that Jefferson had the completed volume bound, although no mention of this exists in Jefferson's surviving correspondence. Frederick A. Mayo of Richmond, Virginia, bound the volume in red morocco with gilt edging. "MORALS / OF / JESUS" was stamped in gilt on the spine. Mayo's bookbinder's label was affixed on the front inside cover.

The Life and Morals of Jesus of Nazareth was very likely among the works on morality that Jefferson read every evening before retiring to bed. He wrote in 1819, "I never go to bed without an hour, or half hour's previous reading of something moral, whereon to ruminate in the intervals of sleep."[14]

Available in Our Online Shop: "The Jefferson Bible Smithsonian Edition"

Available in Our Online Shop: "The Jefferson Bible"