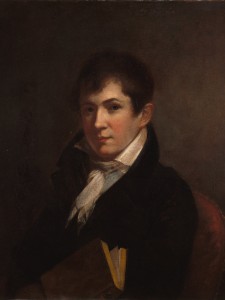 Provenance: This portrait was not released in the liquidation sale in 1828; it was held back with other paintings by Martha Jefferson Randolph. It was given to Jeff and was retained by his descendants until its presentation to the Thomas Jefferson Foundation in 1979.

Historical Notes: When Jefferson's eldest grandson and namesake, Thomas Jefferson Randolph, studied at the University of Pennsylvania, he lodged with Jefferson's old friend Charles Willson Peale, the painter and naturalist. Peale painted young Jeff's portrait and presented it as a gift to his grandfather, who was then U.S. President. "I now send you a Picture by this Stage as a small pledge of my esteem, it will I hope be long in your view, when you will remember that it was painted by your friend at the age 68, then reviving a fondness for an art which was long neglected by attachments to the charming Study of Natural history."[1] Jefferson was delighted to receive the portrait. He told Peale:

. . . I must write you a short letter returning you a thousand thanks for the portrait of my grandson, which is indeed inimitably done. I do not know whether age impairs the faculties of your art, but I am sure it would do honor to any period of life. it will be a treasure to his parents & not less so to me.  . . .  I believe you never ramble for the purposes of looking out subjects for your Museum. were a ramble to lead you to Monticello, we should all recieve you with open arms & hearts.[2]