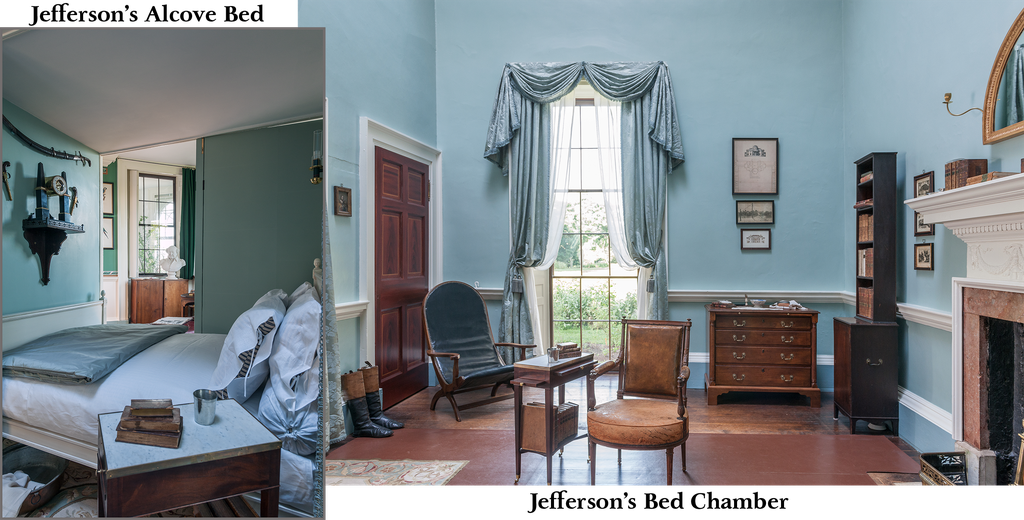 Color: There is evidence that this room was once wallpapered; today it is painted blue-green, a shade popular when Jefferson lived in Paris in the 1780s.

Architectural Features: An alcove bed, open on both sides, joins the Bedroom with Jefferson's Cabinet, or office – a hinged, double-door folding screen separates the two rooms when shut; a privy was located near one end of the bed, an early example of indoor bathroom facilities in America; the room features one of the house's thirteen skylights; a closet over the bed utilized space efficiently and was accessible via ladder. Furnishings of Note: Clothes "horse" in closet (reconstructed); obelisk clock at foot of bed enabled Jefferson to get out of bed "with the sun"; crimson silk counterpane with fringe (designed by Jefferson) covered the bed in winter, while a blue silk duvet saw service the year through; mirrors were used to maximize the natural light.

1814. (Francis Calley Gray). "Mr. Jefferson took us from his library into his bed chamber where, on a table before the fire, stood a polygraph with which he said he always wrote."[fn]Francis Calley Gray, Thomas Jefferson in 1814: Being an Account of a Visit to Monticello, Virginia (Boston: The Club of Odd Volumes, 1924), 74.[/fn]

1815 November 4. (Martha Jefferson Randolph to Jefferson). "In the closet over my bed you will find a bag tied up, and labelled 'Wolf-skin pelisse,' and another labelled 'fur-boots,' wherein those articles will be found. the pelisse had better be sowed up in a striped blanket to keep it clean and uninjured; the boots in any coarse wrapper."[fn]PTJ:RS, 9:147-48. Transcription available at Founders Online.[/fn]

1823 January 18. (Margaret Bayard Smith). "The bed is built into the wall, in a sort of alcove, which in winter must be very comfortable, as it excludes every draught of air – but in the summer, must for the same reason be very uncomfortable. I observed the same arrangement in all the chambers I saw. On the wall, at the foot of the bed was hung his pistols and sword, which I imagine has not been removed for many a year: against the wall, at the head of his bed, was a lamp, which enabled him, when he wished to read, to do it with great safety and convenience."[fn]Richmond Enquirer, January 18, 1823.[/fn]