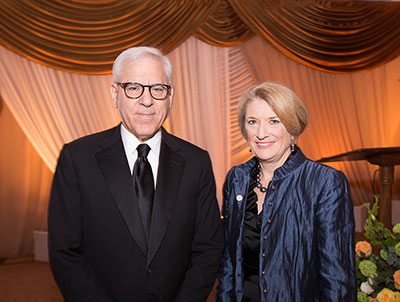 CHARLOTTESVILLE, VA– Monticello today announced that it will receive an additional $10 million gift from David M. Rubenstein, philanthropist and co-CEO of The Carlyle Group. Rubenstein’s second gift will provide ongoing support for the Mountaintop Project, a multi-year effort to restore Monticello as Jefferson knew it, and to tell the stories of the people—enslaved and free—who lived and worked on the 5,000 acre plantation.  Monticello, a UNESCO World Heritage Site, reflects the ideals, ambitions, and realities of its creative and complex owner.

The new gift brings Mr. Rubenstein’s total contributions to Monticello to $20 million, among the largest commitments in Monticello’s history.

David M. Rubenstein said, “Monticello symbolizes an important chapter of our nation’s history, and I am proud to support efforts to tell this story. I hope this gift allows visitors to more fully understand and appreciate Thomas Jefferson, author of the Declaration of Independence, who so memorably articulated a dream for this country, and who continues to inspire Americans to achieve that vision.”

“The Mountaintop Project is a critical milestone in our efforts to fully reveal Jefferson’s world.  We are deeply grateful to Mr. Rubenstein for this generous and transformative gift,” said Leslie Greene Bowman, president and CEO of the Thomas Jefferson Foundation. “His continued support accelerates our ability to share a more complete story of Jefferson for millions of visitors.”

The gift will enable Monticello to finish the restoration of the landscape of slavery along Mulberry Row, once the plantation’s dynamic “main street.” Monticello will also use the gift to restore and update iconic, first-floor rooms in the house.   In addition, Rubenstein’s gift will provide funding for a new lighting system to illuminate Monticello interiors and the historic landscape for future generations of visitors.

This latest gift to Monticello is part of David Rubenstein’s “patriotic philanthropy” efforts to protect and preserve important historical and cultural treasures and make them more accessible to the public. Rubenstein’s recent gifts include $5 million to the White House Visitor Center, $10 million to Montpelier, and $12.3 million to Arlington House, the home of Robert E. Lee. He also donated $7.5 million to hasten the repairs to the Washington Monument after the 20ll earthquake.

Monticello is pleased to recognize Mr. Rubenstein’s contributions by naming the David M. Rubenstein Visitor Center in his honor.

The Thomas Jefferson Foundation was incorporated in 1923 to preserve Monticello, the home of Thomas Jefferson, in Charlottesville, Virginia. Today, the foundation seeks to engage a global audience in a dialogue with Jefferson’s ideas. Monticello is recognized as a National Historic Landmark and a United Nations World Heritage Site. As a private, nonprofit organization, the foundation’s regular operating budget does not receive ongoing government support to fund its twofold mission of preservation and education. About 440,000 people visit Monticello each year. For information, visit www.monticello.org.