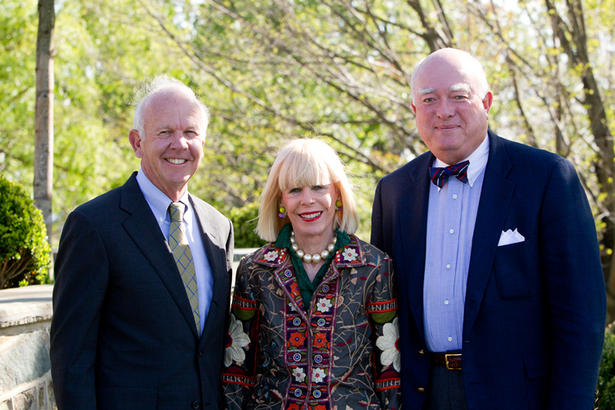 CHARLOTTESVILLE, VA.—J.F. Bryan of Jacksonville, Fl., Pamela Reynolds of Richmond, Va., and John “J.B.” Birdsall of Charlottesville, Va., have been elected members of the Board of Trustees of the Thomas Jefferson Foundation, the private, nonprofit organization that has owned and operated Monticello since 1923.

J.F. Bryan, IV, a Jacksonville, Florida native, was involved in the insurance industry for thirty years; he spent the last 13 years as President of Independent Insurance Group before the Company was sold to American General in 1996.

Bryan currently serves as Chairman of the Board of LISC (a local initiative to redevelop challenged neighborhoods). He serves as Chairman of the Reinhold Foundation, and is a member of the Board and Past Chairman of Bok Tower Gardens in Lake Wales, FL, the Schultz Center for Teaching & Leadership, the James Madison Institute, Episcopal Children Services Foundation, Jacksonville Symphony Assn., Ronald McDonald House Advisory Board, Body & Soul, Bethune-Cookman College, the Jacksonville Zoo, and Evergreen Cemetery. He is a member of Jacksonville Community Council, Inc. board.

Bryan also served many years on the board of Jacksonville University (he recently received an Honorary Degree for his 21 years of service), the Non-Profit Center, Episcopal Relief and Development, as well as a six year term as Regent of the University of the South, his alma mater. He has been a life-long active member of the Episcopal Church of the Good Shepherd in Jacksonville. He and his wife Peggy are the parents of three sons and five grandchildren.

J.B. Birdsall is the former President of a Florida based family-owned containerized shipping business which operated owned and chartered vessels throughout the Bahamas and Caribbean regions.  He retired from that position in 1987, and with his wife, Mary Scott, (a Charlottesville native) moved to her childhood home in western Albemarle County.  Birdsall remained active on the Boards of both Tropical Shipping and its parent, Nicor Inc., until the latter was merged with AGL Resources in December, 2011. Since moving to Charlottesville, Birdsall has served on the Board of the Piedmont Environmental Council.  Land preservation through the use of conservation easements has remained one of his constant pursuits. He was a founding member of the College Foundation at his alma mater, the University of Virginia, and has also served the University as a member of the National Advisory Council for the Jefferson Scholars Foundation.

Pam Reynolds has been a stalwart supporter of cultural heritage in Richmond and the mid-Atlantic region. She is the past chair of the Board of Trustees of The Virginia Museum of Fine Arts (VMFA), and served on the VMFA board from 1999 through 2010. Reynolds has served on the boards of the Arts Council of Richmond, the Richmond Symphony, Theatre Virginia, Theatre IV, the Carpenter Center, Friends of the Kennedy Center, CenterStage Foundation, the Virginia Opera, the Richmond Board of Stratford Hall, and the American Council for the Arts.  She has also previously served as chair or co-chair of the Richmond Children’s Festival, Richmond Ballet’s Gala in New York, A Richmond Celebration and VMFA’s Faberge´ Ball. Reynolds is married to Richard S. (Major) Reynolds, III, grandson of Richard S. Reynolds, Sr. the founder of Reynolds Metals Company and President of the Richard S. Reynolds Foundation.

“The Foundation is truly fortunate to welcome these exceptional individuals and friends,” said Leslie Greene Bowman, president and CEO of the Thomas Jefferson Foundation. “Mr. Bryan, Mrs. Reynolds and Mr. Birdsall have committed their time to serving important initiatives in the past and we look forward to the opportunities their leadership will bring to Monticello in the future.”