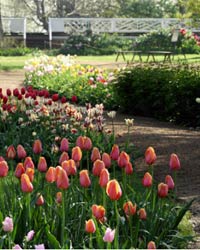 CHARLOTTESVILLE, VA.—In celebration of the Garden Club of Virginia’s restoration of the twenty oval flower beds and the winding walk flower border, Monticello will hold a garden party during Historic Garden Week in Virginia, with award-winning author Andrea Wulf on April 18.

This year, marks 70 years since the restoration of the winding walk flower border and oval bed plan at Monticello. Each April, colorful tulips dominate the stage at Monticello.  But what you see today—the beauty and splendor of the gardens had virtually disappeared after Jefferson’s death in 1826. The Garden Club of Virginia played an important role in restoring Jefferson’s gardens at Monticello. The flower gardens were revived and restored between 1939 and 1941.

In celebration of Historic Garden Week in Virginia, award-winning author Andrea Wulf, a former fellow at the Thomas Jefferson Foundation’s International Center for Jefferson Studies, returns to Monticello to discuss her newly released book “Founding Gardeners, The Revolutionary Generation, Nature and the Shaping of the American Nation.”

Wulf's new book Founding Gardeners, published in March, offers a fascinating look at the revolutionary generation from the unique and intimate perspective of their lives as gardeners, plantsmen and farmers.

In Founding Gardeners, Wulf shows how gardening, agriculture and botany were elemental passions for the founding fathers—as deeply ingrained in their characters as their belief in liberty for the nation they were creating. She describes how, even as British ships gathered off Staten Island, George Washington wrote his estate manager about the garden at Mount Vernon; how a tour of English gardens renewed Thomas Jefferson's and John Adams's faith in their fledgling nation; how a trip to the great botanist John Bartram’s garden helped the delegates of the Constitutional Congress to break their deadlock; and why James Madison is the forgotten father of American environmentalism.

Wulf lives in Britain where she trained as a design historian at the Royal College of Art. She is the author of “The Brother Gardeners. Botany, Empire and the Birth of an Obsession” and the co-author of “This Other Eden: Seven Great Gardens and 300 Years of English History”. She has written for the Sunday Times, the Financial Times, the Wall Street Journal, The Garden and Kew Magazine, and reviews for several newspapers, including The Guardian, New York Times, the Times Literary Supplement and the Mail on Sunday.

She has lectured widely to large audiences at the Royal Geographical Society and Royal Society in London, the Academy of Natural Sciences in Philadelphia, Monticello and the Missouri Botanic Garden amongst many others (see events). She is a three-time fellow of the International Center for Jefferson Studies at Monticello, where she conducted research for her books.

She is a regular contributor on BBC radio and television.

The “Brother Gardeners” was long-listed for the Samuel Johnson Prize 2008, the most prestigious non-fiction award in the UK and won the American Horticultural Society 2010 Book Award as well as the CBHL 2010 Annual Literature Award.

“I find that the limited number of our flower beds will too much restrain the variety of flowers in which we might wish to indulge, and therefore I have resumed an idea . . . of a winding walk . . .with a narrow border of flowers on each side. This would give us abundant room for a great variety.” –Jefferson to Anne Cary Randolph, June 7, 1807