The Second Floor North Octagonal room has been restored 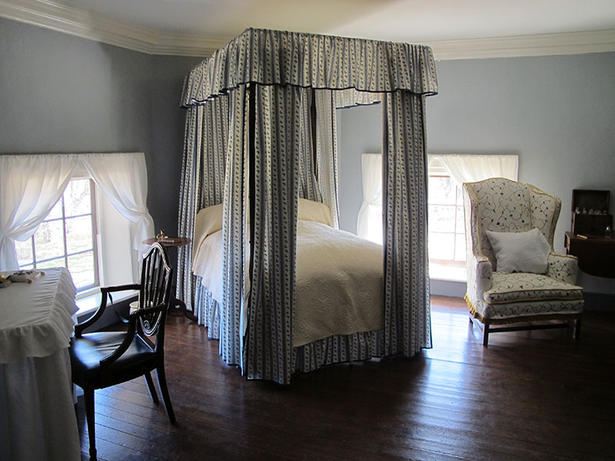 CHARLOTTESVILLE, VA—Visitors on Monticello’s Behind-the-Scenes tour will now experience a newly furnished upstairs room as part of their tour starting this week. The north octagonal bedroom on the second floor is now being interpreted as “Aunt Marks’ Room,” the space occupied by Jefferson’s sister.  The room has been installed to help interpret family life at Monticello.

Anne Scott Marks (October 1, 1755 - July 8, 1828), Thomas Jefferson’s youngest sister was called “Aunt Marks” by Jefferson’s children and grandchildren. She had no children of her own and was left impoverished after her husband’s death in 1811. She came to live at Monticello in 1811 and remained there  for 17 years  until her death in 1828, two years after her brother died  In 1823, one of Jefferson’s granddaughters described her as a “poor old lady.”

The North Octagonal bedroom is furnished to interpret an elderly widow’s life story and the themes of family connections and obligations, dependent widowhood and its consequences, and elder care in the early 19th century.

The room is octagonal in shape with floor-level windows and an alcove. The walls have been painted gray distemper and the woodwork is cream white to recreate the original decorative scheme documented by paint research. Furnishings include a bedstead and curtains, dressing table, easy chair, and a clothes press attributed to the Monticello joinery. A Franklin stove, possibly the original, now fills the hearth. Natalie Larson of Historic Textiles in Williamsburg, Virginia, made the bed hangings, window curtains, and the hand-embroidery for the slipcover for the easy chair.

In June 2010, the Thomas Jefferson Foundation introduced the Behind-the-Scenes Tour to its list of programs. The tour provides access to private second-floor bedrooms once occupied by members of Jefferson’s family, the iconic Dome Room on the third floor, and the new, interactive “Crossroads” exhibition under the house.  A visit to the upstairs rooms sheds light on how life was lived by Jefferson’s family and the enslaved servants who made Monticello function. The unfinished spaces also provide an opportunity for guides to educate visitors on restoration efforts.

During the tour, visitors can experience unique interior architectural features, learn about on-going historic restoration efforts, and gain insight into what one of Thomas Jefferson’s granddaughters called "the bustle and hurry" of life at Monticello.