New Website for the Digital Archaeological Archive of Comparative Slavery

MONTICELLO, Charlottesville, VA—October is Virginia Archaeology Month, and Monticello archaeologists are pleased to announce the launch of a new website for the Digital Archaeological Archive of Comparative Slavery (DAACS) featuring new data from archaeological sites at Monticello, George Washington’s Mount Vernon, and seven other sites of slavery in Virginia. 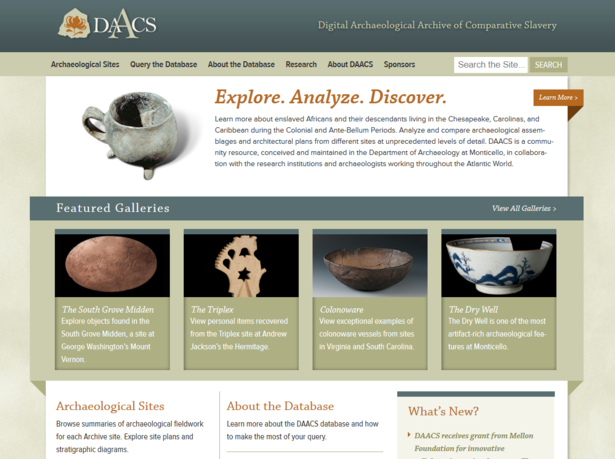 A major feature of the DAACS website re-launch is a set of new image-laden object galleries highlighting artifacts, documents, and maps from important archaeological sites. The galleries were built in collaboration with archaeologists at Mount Vernon who recently catalogued over 100,000 artifacts and field records, including 150,000 faunal remains (animal bones), from south grove midden into the digital archive. Those data are now available through DAACS.

“We look forward to the new insights and scientific discoveries that come from this important partnership,” said Carol Borchert Cadou, Mount Vernon Vice President for Historic Preservation and Collections.

The launch also coincides with the publication of new data from the West Kitchen Yard at Monticello and information on animal bones from seven sites in Virginia.  The deepening of these datasets will provide further opportunities for scholars to address a host of research problems related to slave based-societies.

Fraser Neiman, Director of Archaeology at Monticello, noted that “We are really excited about these additions to the DAACS database and the potential for them to generate new insights into the lives of wealthy plantation owners like Washington and Jefferson and the enslaved people on whom their wealth depended.”

Built and maintained by the Thomas Jefferson Foundation, and based in the Department of Archaeology at Monticello, the Digital Archaeological Archive of Comparative Slavery (DAACS) is a web-based initiative providing free access to archaeological data in order to foster inter-site comparative archeological research on slavery. “The DAACS website allows not only archaeologists and historians, but anyone with a web browser, to access archaeological data at a level of detail that many archaeologists do not have even in their own labs, “ Jillian Galle, DAACS Project Manager, observed.

DAACS has received major funding from the Andrew W. Mellon Foundation, The National Endowment for the Humanities, and the Reed Foundation. DAACS new website was designed by the Charlottesville branding firm Convoy.