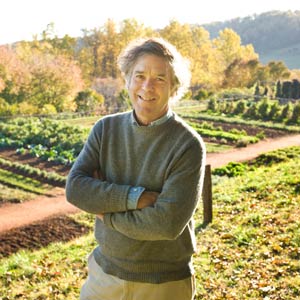 CHARLOTTESVILLE, VA.— Monticello’s Director of Gardens and Grounds, Peter Hatch, often quotes Jefferson’s Memorandum of Services to My Country (September 2, 1800), “The greatest service which can be rendered any country is to add an useful plant to it's [SIC] culture.”

A scholar and gardener, Hatch has dedicated his life’s work to restoring Thomas Jefferson’s revolutionary garden at Monticello.  His significant contributions to historic preservation and gardening are now being recognized by the Garden Club of America.

“I’m flabbergasted by the honor; it’s positively transcendent. Reading over the list of past honorees, I believe I might be the first professional gardener to receive the medal. So I accept on behalf of all those who toil in the earth, my fellow brothers and sisters of the spade.  Of all the things I do at Monticello – write books, run summer Institutes – gardening is the hardest – and the most rewarding thing I do,” said Hatch.

The medal is awarded for outstanding work in the field of preservation and/or restoration of historic gardens or buildings of national importance.

Hatch’s noteworthy career at Monticello started 34 years ago.  He was responsible for the restoration of the 1,000-foot–long terraced Vegetable Garden, where Jefferson assembled plants and vegetables from all over the world.  Today the garden is a beautiful interpretation of Jefferson’s “scientific laboratory.”

Describing his tenure at Monticello, Hatch says, “I’ve learned the twin virtues of gardening: persistence and patience. Despite my lengthy tenure, however, I have not found out who Thomas Jefferson is. Surely, he’s all things to all people; digging a hole to find him, you dig forever. His unbounding complexity makes him a compelling force in both American and world history. And that’s my favorite thing: digging in the earth, digging for the past.”

Hatch’s contribution to historic preservation has shaped the gardens of Monticello. As a lecturer and author he has created a passionate discourse for those interested in learning more about gardening, landscape architecture, cooking and American history.

Hatch has also written numerous articles and lectured in 35 states on Jefferson and gardening.  He also oversees educational programs, including the Garden Tours (for 35,000 annual visitors); the Saturdays in the Garden program of natural history walks, lectures, and horticultural workshops; and the Historic Landscape Institute, a two-week field school for students from around the nation.