CHARLOTTESVILLE, VA—Donald A. King, Jr., of Keswick, Va., has been elected chairman of the Board of Trustees of the Thomas Jefferson Foundation, Inc., the private, nonprofit corporation that has owned and operated Monticello since 1923. 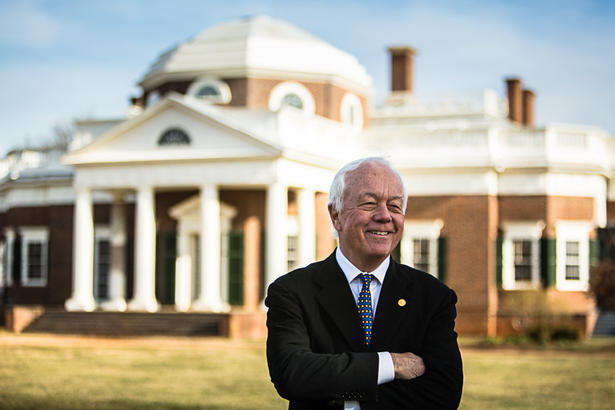 “Gene Lockhart has benefitted Monticello with his strategic acumen and global perspective on the Foundation’s activities.  He is a true friend to Monticello and was an exceptional leader,” said Thomas Jefferson Foundation President & CEO Leslie Greene Bowman. “Under Gene’s tenure we opened the Robert H. Smith Center at Montalto, a significant advancement of the Monticello mission of preservation and education. Gene articulated and propelled our vision to launch educational initiatives nationally and internationally, yet he was equally devoted to site specific challenges, and led the board’s campaign to install state of the art fire protection in the house in 2012.”

2013 marks the 90th anniversary of the Thomas Jefferson Foundation. King will assume the top leadership position of the board as the Foundation plans for its centennial in 2023.

“Monticello is fortunate to have someone of Don King’s dedication, experience and talent leading the Foundation at this momentous time in our history.  Our first century has been largely about the preservation and restoration of Monticello.  With Lockhart’s and King’s leadership we are well positioned to engage a global audience in a dialogue with Jefferson’s ideas.”

King joined the Board of Trustees in 2009.  He has served on the Executive, Finance, External Affairs, Buildings and Grounds, and Scholarly Activities committees. In 2010 he served as the founding chairman of the Monticello Summit, recognizing donors of annual gifts of $25,000 or more. He was elected vice chairman of the board in 2011.

King spent his career in the investment real estate business, first as a developer and owner. In 1979 he joined the real estate investment management business, RREEF, serving as an advisor to large pension funds and retirement systems. He was the first Managing Partner of RREEF, a position he held from 1988 to 2002. In 2002 after RREEF was purchased by Deutsche Bank, he became Global Head of Real Estate of Deutsche Asset Management. King retired in 2005 and was elected Vice Chairman of Deutsche Asset Management.