The edited travel diary of Thomas Jefferson’s granddaughter, Ellen Wayles Coolidge, will be released this December. 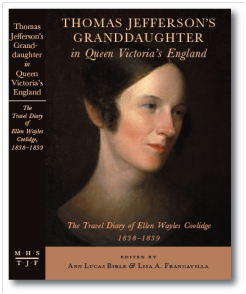 homas Jefferson promised his five-year-old granddaughter Ellen that one day “you will become a learned lady and publish books yourself.”  Coolidge’s first book, a diary she kept as an adult woman, will be published this December by scholars at Monticello’s Robert H. Smith International Center for Jefferson Studies. Thomas Jefferson's Granddaughter in Queen Victoria's England: The Travel Diary of Ellen Wayles Coolidge, 1838-1839, edited by Ann Lucas-Birle and Lisa A. Francavilla, will be co-published by the Massachusetts Historical Society and Thomas Jefferson Foundation and distributed by the University of Virginia Press.

Monticello Research Historian and co-editor of the book Ann Lucas-Birle will give a richly illustrated presentation about the diary at the Thomas Jefferson Visitor Center, Tuesday, December 13, 2011. The talk, Jefferson's Granddaughter in Victoria's England begins at 4 p.m., and will include readings from the diary from a descendant of Ellen Coolidge.  A book signing follows at 5 p.m. in the Museum Shop. The Thomas Jefferson Visitors Center will be open during the event, and participants will have the opportunity to see on display there a selection of recently discovered Jefferson books on loan from Washington University.  The volumes, which were part of Jefferson’s original library at Monticello, later belonged to Ellen and her husband Joseph Coolidge, and include architecture books that Jefferson used to design the University of Virginia. An 1836 portrait of Ellen Coolidge by the artist Francis Alexander will have its first public showing at the Visitors Center.

Ellen was the fourth child of Thomas Jefferson’s daughter Martha and Thomas Mann Randolph. Ellen, her mother and siblings, came to live at Monticello with Jefferson after he retired from the presidency in 1809.

In her diary entries, Ellen vividly describes her nine-month stay in London in 1838-1839, at the beginning of Queen Victoria’s reign. Coolidge records the details of London's public buildings, museums, parks and of her conversations with writers such as Thomas Carlyle, Anna Jameson and activists including Charles Sumner and Harriet Martineau. She gives firsthand accounts as she watches the young Queen Victoria open Parliament and battle the first scandal of her reign, chronicles artwork held in both public and private collections, and acknowledges a new appreciation for the modern art of J. M. W. Turner. As she encounters her mother's school-girl friends and recalls the songs sung by her grandfather while working in his study, Coolidge's thoughts return to Monticello and the lessons she learned there.

The book launch is free and open to the public, but space is limited.  Please register with mscottfleming@monticello.org or call (434) 984.7504.